What Is CBD? Everything You Need to Know

Cannabidiol, or CBD, is but one of many cannabinoids found in cannabis plants. As it derives from both hemp and marijuana, there are concerns regarding its safety and legality. However, one can bypass the laws against tetrahydrocannabinol, or THC, which is the only cannabinoid that makes users “high.” A pure CBD oil does not contain THC and is therefore legal and proven safe in many studies

CBD has become mainstream news. Almost daily, you can read about new therapeutic uses discovered for it. Scientists are studying its many medicinal properties and finding it a powerful analgesic, anti-inflammatory, antispasmodic, anticonvulsant, antidepressant, antioxidant, antibacterial, and anti-everything between. People are using it to treat just about any symptom of any disease.

What is CBD Oil?

CBD oil is a concentrated form of cannabidiol, a superior cannabinoid that binds to endocannabinoid receptors throughout the body, most notably within the immune system and brain.

Once extracted, manufacturers dilute the pure CBD with a carrier oil, such as olive or coconut oil, and it can come from either marijuana or hemp plants. However, if derived from marijuana, it may still contain traces of THC.

Although these traces of THC are too small to make anybody “high,” most prefer a CBD oil derived from hemp, since hemp plants do not contain THC themselves. Regardless of whether you use a hemp- or marijuana-derived CBD oil, it will not alter your state of mind, but tiny traces of THC can still show in blood and urine tests if derived from marijuana plants.

Differentiating CBD from other cannabis-based oils can be confusing, but there are differences between them that will make identification easy. Hemp seed oil derives from the cold-pressed seeds of industrial hemp, resulting in a cannabinoid-low oil with a nutty flavor. It contains tiny traces of CBD and other cannabinoids but is high in fats, vitamins, and nutrients. It is popular for bio-fuels and skincare products.

However, cannabis oil comes from THC-rich marijuana, which means you will need to buy it in a state where it is legal for medicinal purposes. The number of cannabinoids in cannabis oils differs between products, but commercially manufactured oils contain controlled concentrations of both CBD and THC, with some removing THC entirely for those who do not want to get “high.”

Scientists, doctors, and patients are lauding the health benefits of CBD to anyone who will listen. It treats a variety of medical conditions, including cancer, skin problems, mental health issues, even pain. Because cannabis has a decades-long history of prohibition as a Schedule 1 drug, studies are still in their infancy. Despite this, we do know much about CBD already, such as these eight science-backed benefits:

Initial research showed CBD with much promise for relieving pain in chronic sufferers. More and more studies support these results. Many found CBD lowering joint and other inflammatory pain without any side effects whatsoever, pointing to it being an ideal solution for treating arthritis in people. In fact, the U.S. National Library of Medicine shows Sativex, a cannabis-based medicine, effective at relieving pain in those with rheumatoid arthritis.

Other studies also prove Sativex capable of providing pain relief and reducing muscle spasms in studies for multiple sclerosis. After analyzing the results of several studies and clinical trials, a report in 2017 concluded that cannabinoids, especially CBD, reduce chronic pain symptoms significantly in patients suffering a variety of medical conditions, not just arthritis and multiple sclerosis.

Many studies and anecdotal stories confirm the capacity of CBD to treat depression, anxiety, and other mental health issues effectively. This is because CBD activates the brain receptors responsible for serotonin production, a neurotransmitter responsible for regulating mood, appetite, and sleep. Various animal studies also support significant antidepressant and anxiolytic properties of CBD.

Limited human studies only sampled a small population size, so more studies are underway. One such study in a review published by the U.S. National Library of Medicine showed CBD reducing the effects of anxiety related to public speaking, with many others proving it effective in treating post-traumatic stress disorder and other anxiety-related issues, as well as their effects on sleep and eating habits.

Reports are conflicting, however. One report from 2017 analyzed the results of seven clinical trials and six case studies that covered 201 participants. It found no evidence of any effect on major bipolar and depressive disorders, although it did not huge improvements for those suffering from social anxiety. Most studies support its benefits for those suffering these and other mental health concerns.

According to both the National Cancer Institute and the American Cancer Society, CBD kills cancer cells in laboratory tests and slows metastasis, or the spread of cancer cells, in cancer patients. Nobody touts CBD as a cancer cure, but much research shows it highly beneficial in suppressing the growth of many types of cancer, including colon, prostate, lung, and breast cancers. It also relieves associated pain, vomiting, and appetite loss in those having cancer treatments, such as chemotherapy and radiation.

Scientists have been studying the effects of CBD on seizures for a few years already. Studies find it reducing both the frequency and severity of two rare types of childhood-onset epilepsy, being Dravet syndrome and Lennox-Gastaut syndrome. In fact, the first cannabis-derived drug specifically for these disorders, Epidiolex, recently gained approval from the U.S. Food and Drug Administration.

Several major studies investigated the effects of CBD on psychotic disorders, as well as its role in treating patients with Parkinson’s disease, schizophrenia, and related problems. According to the U.S. National Library of Medicine, they confirm the anxiolytic, antidepressant, and antipsychotic properties of CBD, and report it an effective treatment for schizophrenia, bipolar disorder, and Parkinson’s disease.

Surprisingly, CBD counteracts the effects of too much psychoactive THC, indicating the enormous potential for use in treating those addicted to cannabis. In other studies analyzed by the U.S. National Library of Medicine, CBD helps folks addicted to other substances too, including tobacco, alcohol, even opioid drugs, such as fentanyl, and illicit drugs, like heroin and cocaine.

Some studies show CBD actively fighting both Type 2 diabetes and heart disease. According to a study analyzing 18,000 Swedish men and women, published in the U.S. National Library of Medicine, this is, for the most part, thanks to the anti-inflammatory properties of CBD, which effectively lowers diabetes risk in both animals and humans, while offering the same preventative benefits for heart disease.

From acne to eczema, even psoriasis, CBD proves highly beneficial for the skin, even more so than vitamins C and E combined. According to the Journal of the American Academy of Dermatology, CBD even treats severe skin disorders effectively, including skin cancer, inflammatory skin disease, and pruritus. This is true whether you apply it topically or ingest it internally, but especially for both. 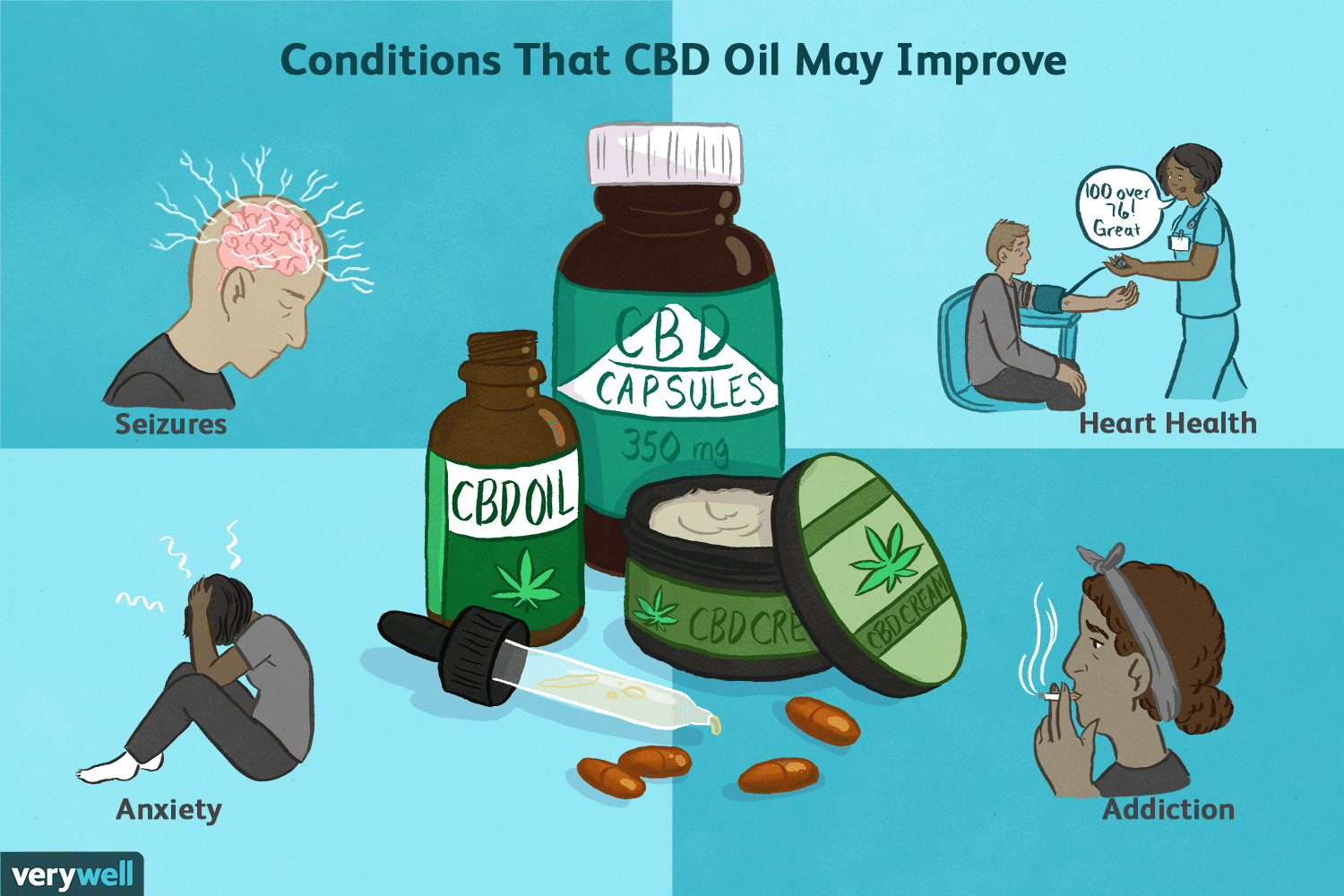 Initial research finds CBD oil with incredible promise in treating an array of health issues, from anxiety to acne, depression, cancer, even addiction. This cannabinoid has a range of medical properties. Studies prove it a powerful antioxidant, anti-inflammatory, antipsychotic, anticancer, antispasmodic, anticonvulsant, anxiolytic, analgesic, and anti-everything between. What is more, CBD has no side effects.

Camilla Morgan is a blogger by profession with 5 years of experience. She is associated with CBDSafe, An Online Shop for CBD Products. She is an admirer of sharing her innovative ideas with others on the Wellness for Mind and Body. She like Traveling, Reading and has a great passion for Writing.

About the Author: Doyle Faulkner

Doyle is an Award Winning health researcher, writer, and Editor for BestSuggestor and done Masters Degrees in Sport & Exercise Science. He is investigating dietary supplements since last 15 years and appeared in Fox 29 News, Prevention Magazine, WebMD etc. He is passionate about the growing awareness of natural health options and what this means to support our healthy, balanced lifestyles. He is have written some books on the healthy diet which are featured on Amazon. He also enjoys sharing the latest research and product reviews in a way that people can use to improve their health.